SharpSpring Stands with the Black Community

This is an internal letter sent to our company today. However, in order to show our unwavering public support for the Black community, we are also sharing it here.

Once again our world shatters. America’s long history of racism, discrimination, and intolerance is again on full display… and it’s infuriating. Heartbreaking. Maddening.

The senselessness of it is overwhelming. Our hearts break when we think about our coworkers, our friends, our families that live with racism as a constant presence in every facet of their lives.

Too often, companies – especially public companies – sit on the sidelines for fear of upsetting or alienating investors, partners, or customers. But there is such a thing as right and wrong, and to remain silent today is to be complicit.

We will not be complicit.

With this in mind, and stated as clearly and forcefully as we can:

SharpSpring stands united with the Black community and all victims of discrimination, oppression, and violence in all its forms.

Further, we stand united against racism, bigotry, xenophobia, nationalism, and all the tools used by some, including some of those in power, to divide us as people and as a nation.

Like so many others, we have had enough. Watching a strong, 46-year-old Black man, handcuffed and on his stomach, calling out for his mama with his last breath has taken something from our soul. That wound is made deeper with the knowledge that only the recording of his death has made it unusual.

People of color are protesting for the right to breathe. Not wealth. Not education. Not equal opportunity. We are still stuck at breathe in this nation.

The United States has built a system of oppression dating back to its founding. While we have made progress, it has been too slow. In many ways, the war on drugs has reversed much of the progress from previous generations – saturating the entire legal system with laws and policies that serve to oppress and incarcerate people of color. As recent events have further proven, our policing has become so aggressive, so absolute, that it has overwhelmed our legal system’s ability to provide fair trials. Adding to this miscarriage, we’ve privatized our prison system, creating a strong profit motive to keep an entire class of people locked up, denying them their voting rights, their right to work, and entrapping generation after generation in a cycle of poverty and powerlessness. In 1980, at the beginning of the war on drugs, around 500,000 Americans were incarcerated. Today, there are more than 2.3 million. Not surprisingly, the vast majority of these increases have come from the Black and Latino communities. We are still stuck at breathe.

This is not an anti-American message. We love our country. Acknowledging our faults openly and honestly makes us stronger. It is the difference between patriotism and nationalism.

This is not an anti-police message. While our focus today needs to be centered on the oppressed, we must also make this point. To stand with the Black community is not to stand against the police. The majority of police want to help their local communities and society at large. We need them. We appreciate them. We stand with them too.

In an effort to turn our anger, our heartbreak, our emotions into action, SharpSpring will donate $100,000 to help break systemic oppression of voting rights in our home state of Florida. We recognize that we do this at a time when, due to COVID-19, our employees are already making financial sacrifices. But we do so knowing that the need to stand in solidarity with the Black community supersedes our own immediate financial needs. We are fortunate to be in a position to show this support, and hope each of you stand with us wholeheartedly.

By donating to both the Florida Rights Restoration Coalition and Florida chapter of the American Civil Liberties Union, we hope to do our part to break the cycle of oppression of our Black brothers and sisters. We love you, and we stand with you.

In addition, we implore everyone to vote. Peacefully protest and vote. Voice your feelings on social media, but vote. Vote nationally. Vote locally.

November 3rd will be a pivotal moment in our history.
_____ 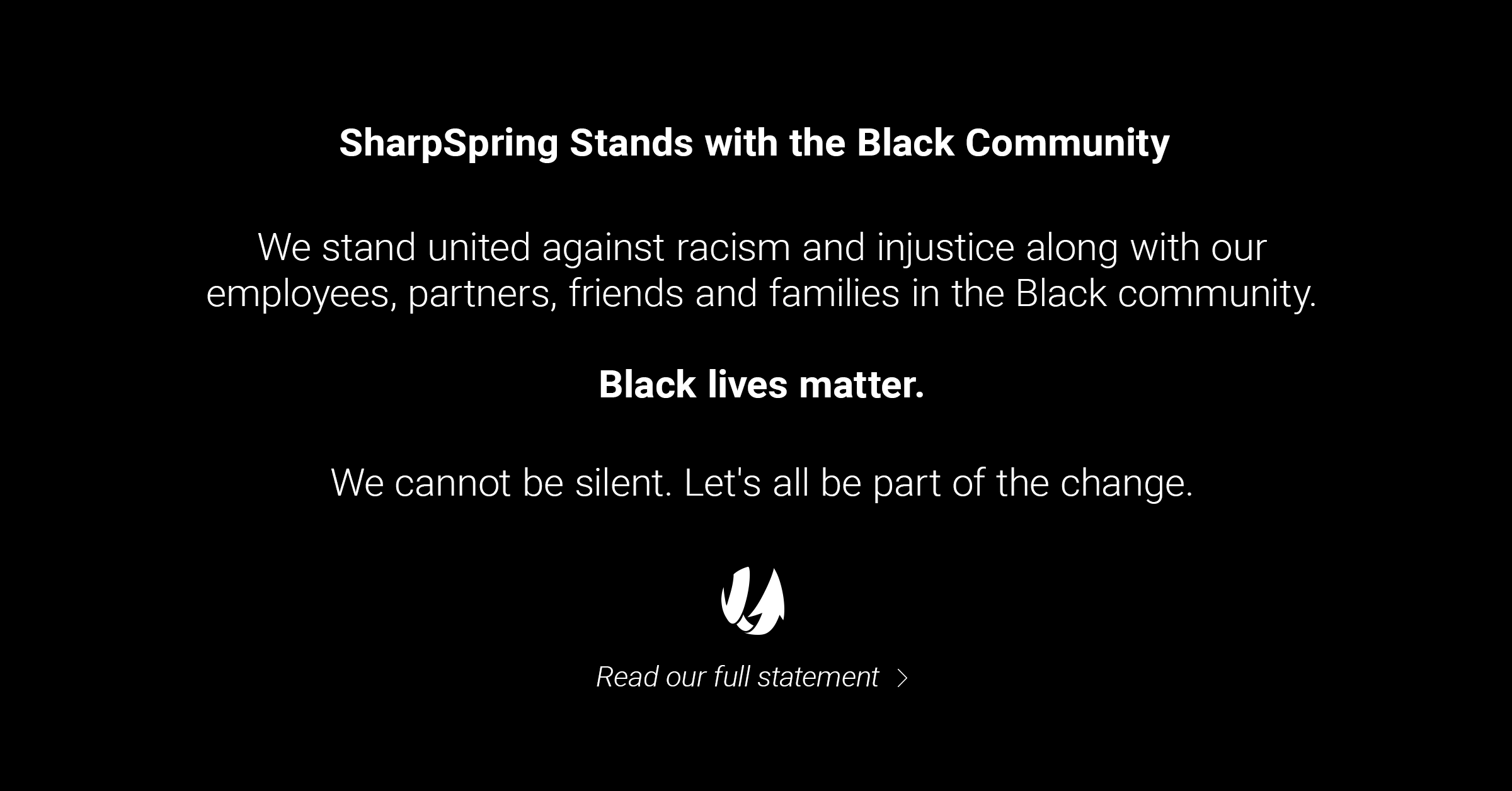