Henry Ford Village (HFV) is a senior retirement community in Dearborn, Michigan, located on the grounds of Henry Ford’s birthplace. HFV is home to several hundred residents who enjoy a fully independent lifestyle in a safe, secure setting.

As part of their solution, Biznet utilized SharpSpring’s dynamic email content functionality to nurture prospects in an efficient, flexible and responsive manner.

Here’s the story of how it all came together.

HFV provides five levels of service: independent living, assisted living, memory care, rehabilitation and skilled nursing. Independent living is their “hero” service line. It generates the most interest, as well as the most revenue, for the organization.

On the HFV website, a SharpSpring-based Contact Us form (figure 1) allows visitors to indicate which service they are seeking. Choices are presented via an “Area of Interest” checkbox group custom field on the form. Visitors can select one or all of the services, and there is also an Unsure/NA option. 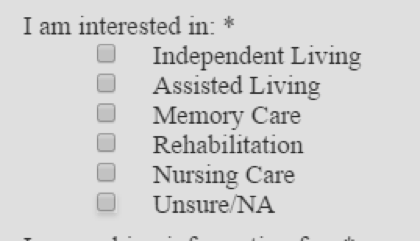 The Contact Us form is one of the most popular pages on the HFV site, generating nearly a half-dozen submissions per day from seniors themselves or from their caregivers.

When the new website launched in August 2015, HFV was responding to prospects who completed the form with a generic, on-screen “thank you” message, which notified prospects that someone from HFV would be in touch with them soon.

An HFV residency counselor then contacted the prospect to continue the conversation.

The personal follow up was great, but from a digital messaging standpoint, the on-screen thank you was all there was. There was no thank you email, no individualized reply, and no passing along of deeper content.

We knew things could be better.

In thinking about a solution, our intent was to immediately send each person who completed the form an email that acknowledged their interest and provided more information.

From the time the site launched, we had been capturing area of interest preferences as part of each prospect’s profile, so we knew we could leverage that insight.

At first, we contemplated creating individual emails, but we quickly realized that such an approach presented a logistical nightmare.

Writing content to cover all possible scenarios wasn’t a challenge, but managing the many different emails, tasks and workflows to support the effort was something we wanted to avoid.

It was around this time that we had an “aha” moment. We attended a SharpSpring Springboard Live webinar on the topic of dynamic email content.

That’s when we knew we had our solution.

The best part is, all of these rules can be codified into a single email that builds itself dynamically according to the if-then conditions.

From a prioritization standpoint, we knew that HFV services were ranked in the following order of importance:

Our first task was creating a planning document. It consisted of:

Content Rules were the blueprints that told us what the if-then rubric would be. In our case, it was as follows:

It’s worth pointing out that the rules call for the inclusion of independent living – HFV’s hero service – in every email, either in a lengthier full version or in a shortened version.

The “other” paragraphs simply mention whatever other services the prospect had not chosen.

With the rules established, our next task was cataloging the required content pieces. As noted, our approach called for “full” content pieces for each service, along with a shortened version for independent living, as well “other” pieces that referenced HFV’s other services, in varying combinations.

With the rules and inventory in place, we then wrote all the necessary content pieces. The “full” pieces were each several paragraphs in length. The IL shortened piece was a paragraph, as were each of the “other” pieces.

In addition, we wrote boilerplate introductory and closing paragraphs. The introductory paragraph included variable inserts that referenced the services a prospect chose, along with the prospect’s name in the greeting.

The email was composed to look like it was a personal email from Bruce Blalock, HFV’s Executive Director.

Once all the content was created, it was just a matter of programming the email. Biznet developers constructed an email that was a series of if-then statements that worked their way through the rules tree.

The finished, fully coded email looked something like this: 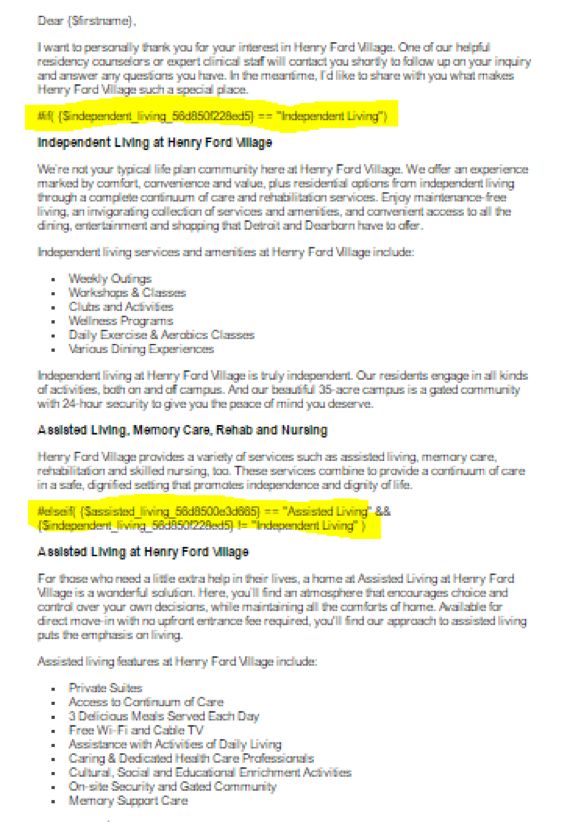 The highlights show the if-then statements. In the first case, the code is saying “if the recipient has independent living,” then show all the content that follows,” which is IL full and other #1.

If the recipient did not have Independent Living as part of their profile, the second statement (the “else, if”) takes over. It says, “if the user has assisted living, then show the AL full, the IL partial, and (not visible in the screen shot) other #2.”

The programming works itself similarly down the line through the content rules and, in this way, builds itself dynamically according to the recipient’s interests.

The beauty of this is that one single email can handle all the permutations of interests that might come in from the Contact Us form.

In all, nearly a dozen different emails are available via the dynamic email approach. A few examples of the finished product are shown below.

An example of a finished email for someone who chooses independent living is as follows: 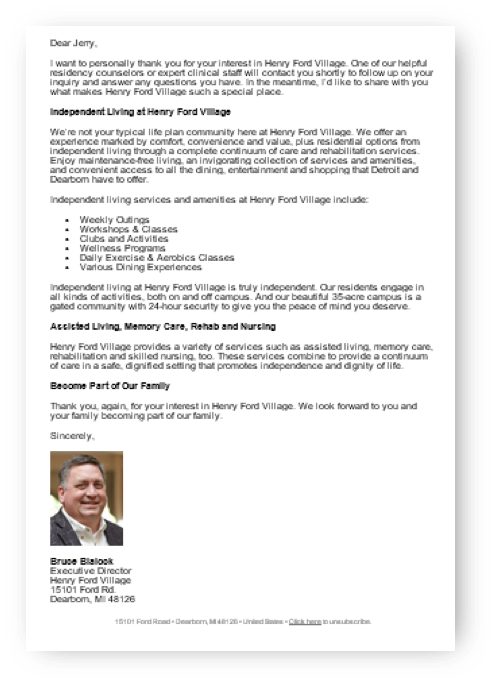 Someone who chooses memory care will receive the following email: 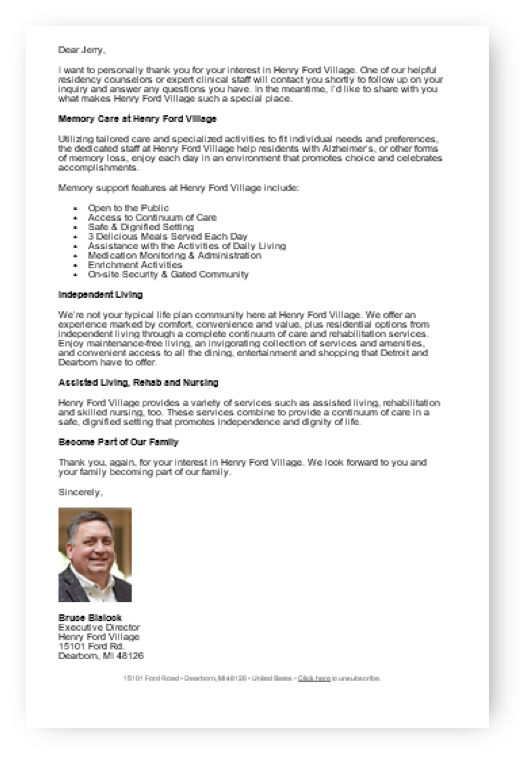 By using the advanced features of SharpSpring marketing automation, HFV was able to leverage one email to personally appeal to anyone who completed the contact form. Once this automation was in place, it eliminated the need for manual responses, yet allowed HFV to include information that was relevant to each lead.

Our future plans call for including links to deeper content and more urgent calls-to-action for the preferred areas of interest.

Until then, we and the client are more than happy with the results provided by the dynamic email content feature. 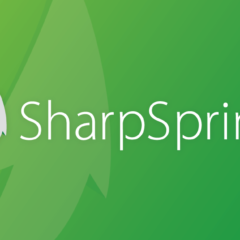 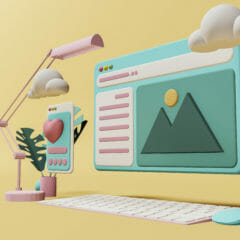 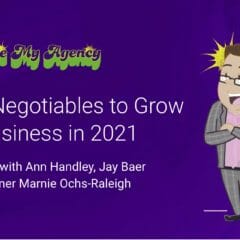 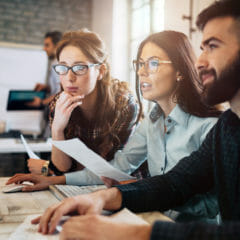